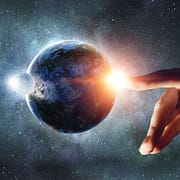 The Bible claims that Yeshua is the Son of God, but how can the eternal Creator of the universe have a son? Did He mix with humanity to father biological offspring? Or maybe replicate His essence through some kind of cosmic reproduction? No, the reality and sense in which the God of Israel can have a Son—and for that Son to be Yeshua—is nothing like anything any mere mortal could conceive. And though it defies comprehension, it was through this embodiment of Himself that God decided—from the beginning—He would not only restore Israel, but bring salvation to the world.