When believers in Yeshua say that they’re “Messianic,” what exactly do they mean? Does it mean they hold strange, unbiblical beliefs? Does it represent a profound, scriptural understanding of the faith not embraced by traditional Christianity? Could it be a combination of both? In this episode, Kevin explores the origins and meaning of the word “messianic,” both from a biblical perspective, and from his perspective as a Messianic Jew. 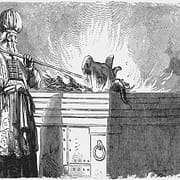 As the first anniversary of the Exodus drew near, while Israel remained at the mountain, God proceeded to detail through Moses the patterns and particulars of the priestly, propitiatory order (Leviticus 1:1ff). Serving also as food for the priests, the edible offerings brought by the people often included various combinations of grain, flour, bread, oil, spice, salt and wine. Yet most of the different types of offering-payments were mainly those of animal sacrifice, ranging from the less expensive turtledoves or pigeons to the larger and increasingly more costly sheep, goats and bulls. The people were invited to make voluntary offerings as acts of devotion to express thankfulness (7:12) or to make a vow (7:16). But when God’s commands were broken—resulting in sin—only a sin offering would suffice. END_OF_DOCUMENT_TOKEN_TO_BE_REPLACED