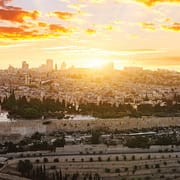 Rejected by both His people and their king, God nevertheless remained faithful to His covenant and to His plan of reconciliation and salvation for the world. Despite the people’s treasonous intentions in demanding a king, God would redeem their evil plea by establishing a king in Israel with a heart both for righteousness and for Him. From the sons of a lowly shepherd, Adonai would choose His true champion. To correct the people’s mistake in King Saul, the God of Redemption would restore Israel’s kingdom in David. END_OF_DOCUMENT_TOKEN_TO_BE_REPLACED