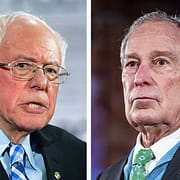 I remember when Senator Joe Lieberman ran as Vice President on the Democratic ticket with Al Gore in 2000. As a Jewish believer in Yeshua, this created a bit of a predicament for me, albeit short-lived. How should I, as a Jew, respond to a potential Jewish vice-presidency? And more specifically, how should I, as a Messianic Jew, respond to a potential Jewish liberal vice-presidency?

Now two decades later, with the recent entrance of Michael Bloomberg into the presidential race (though things can turn on a dime in today’s political climate), for the first time in American history, there are two serious Jewish candidates for president of the United States. While this time around I have no internal turmoil whatsoever, it is nevertheless a unique situation worth reflecting upon, as we see two prominent, influential Jews with deep Jewish ties who have lost virtually all connection to their heritage and their God.