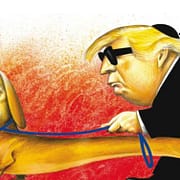 Since the latter half of the 20th century, the world has seen a steady decline in anti-Semitism… or so many of us thought. But for those who have been paying attention—who have never taken their eyes off of God’s treasured people Israel—we have seen anti-Semitism continue and even thrive in many forms. Today, we are beginning to see anti-Semitism in what we previously thought were impossible places—and it is only getting worse.