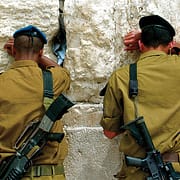 At the center of the Arab-Israeli conflict in the Middle East is a fundamental, socio-religious ideology that says Jews should not exist—anytime or anywhere—much less as the modern State of Israel. As a result, the tiny nation faces a constant threat to her national sovereignty and safety, and the world continually demonizes every effort she makes to defend herself. Despite this perpetual crisis, however, we need not be concerned that Adonai will fail to protect and preserve His people. Eventually, Israel will have peace and safety; in the end, Israel will survive (Zechariah 12:1-9). But what of Israel today? What assurances do we have that during the present era, God will protect and preserve the State of Israel from her ever-present foes? And what is our role and responsibility as we watch these events transpire?