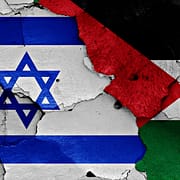 For thus said the Lord of hosts, after his glory sent me to the nations who plundered you, for he who touches you touches the apple of his eye: “Behold, I will shake my hand over them, and they shall become plunder for those who served them. Then you will know that the Lord of hosts has sent me. … And the Lord will inherit Judah as his portion in the holy land, and will again choose Jerusalem.”
(Zechariah 2:8-9, 12, ESV)

On December 23, 2016, the UN Security Council unanimously passed a resolution condemning the State of Israel and demanding a halt to all Israeli settlement activity in the so-called Palestinian territory occupied since 1967 (including East Jerusalem), saying that continued construction is a “flagrant violation” of international law. In other words, the resolution declared that the pre-Six-Day War borders are unchangeable, thereby making any Israeli building behind those borders illegal. By abstaining from the UN vote and refusing to use its veto power, the US went against its long-standing policy of protecting the Israeli State in the UN Security Council.