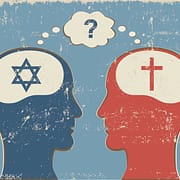 For most people, the idea of a Jew following Jesus is self-contradictory. One is either a Jew, who follows the God of Israel; or he undergoes conversion to become a Christian, and follows the God of the Gentiles—Jesus. In other words, it is widely believed that a Jew who follows Jesus stops being a Jew—he has turned his back on his people and his faith—and becomes a Christian. One can’t be both Jewish and Christian… or so it is thought.