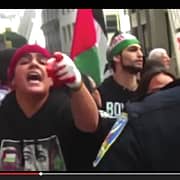 Passover is the season in which Jewish people all over the world remember how God supernaturally and powerfully set our nation free. But now that this year’s joyful celebration has come and gone, I am feeling somewhat melancholy about it. With as much gratitude that Passover stirs in me for Adonai’s everlasting faithfulness and truth, I find my current emotional state considerably tempered by the sobering signs of the times.

Recently, a supporter of the ministry sent me a link to a five-and-a-half-minute video entitled “The Jewish Voices on Campus,” which depicts “a message of hate bred on the tongues of terrorists” that is “now poison[ing] our college campuses today.” As one Jewish student in the video puts it, “Being against Israel has become the ‘cool’ thing to do.” In other words, American college campuses are seeing a sharp and serious rise in anti-Semitic (Jew-hating) rhetoric and behavior, and it is being seen as normal and “cool.” The grossly negative world-sentiment concerning the modern State of Israel has infected the hearts and minds of teenagers—the future leaders and decision-makers of our nation.