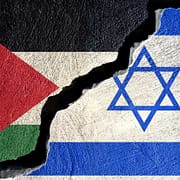 With the recent war in Israel, the clash between Arabs and Jews in the region is once again a hot button issue. While many onlookers on both sides continue to rail against one another, this time, the conflict has also spilled over into cities around the world, with anti-Semitic rhetoric and violence ticking up to even more dangerous levels than before. Given the abundance of misinformation, false accusations and questions surrounding this explosive topic, here are some facts about the tumultuous history of the holy land, and how this recent bout between Israel and the Palestinians got started.

END_OF_DOCUMENT_TOKEN_TO_BE_REPLACED

Since the latter half of the 20th century, the world has seen a steady decline in anti-Semitism… or so many of us thought. But for those who have been paying attention—who have never taken their eyes off of God’s treasured people Israel—we have seen anti-Semitism continue and even thrive in many forms. Today, we are beginning to see anti-Semitism in what we previously thought were impossible places—and it is only getting worse.

END_OF_DOCUMENT_TOKEN_TO_BE_REPLACED

Anti-Semitism is an ancient hatred of the Jewish people that can trace its roots back through Israel’s history, as recorded in the Scriptures. With alarming reports of anti-Semitism on the rise throughout the world, it is worthwhile to consider its origins, and how we can best overcome its effects.

In the beginning, Israel was welcomed into Egypt as a mere tribe of seventy souls (see Exodus 1:5), but within a generation, the people multiplied to such an extent that the king of Egypt grew concerned with their numbers and enslaved them. They were worked ruthlessly, their lives made bitter with hard labor, and their newborn sons decreed to be killed (see Exodus 1:13-16). In this, the Scriptures say that the Egyptians were “in dread” or “loathing” of the people of Israel (see Exodus 1:12).

END_OF_DOCUMENT_TOKEN_TO_BE_REPLACED

Passover is the season in which Jewish people all over the world remember how God supernaturally and powerfully set our nation free. But now that this year’s joyful celebration has come and gone, I am feeling somewhat melancholy about it. With as much gratitude that Passover stirs in me for Adonai’s everlasting faithfulness and truth, I find my current emotional state considerably tempered by the sobering signs of the times.

Recently, a supporter of the ministry sent me a link to a five-and-a-half-minute video entitled “The Jewish Voices on Campus,” which depicts “a message of hate bred on the tongues of terrorists” that is “now poison[ing] our college campuses today.” As one Jewish student in the video puts it, “Being against Israel has become the ‘cool’ thing to do.” In other words, American college campuses are seeing a sharp and serious rise in anti-Semitic (Jew-hating) rhetoric and behavior, and it is being seen as normal and “cool.” The grossly negative world-sentiment concerning the modern State of Israel has infected the hearts and minds of teenagers—the future leaders and decision-makers of our nation.