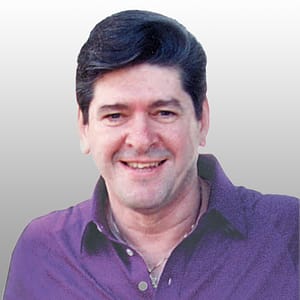 A native of Philadelphia, Manny was raised in a non-religious Jewish home. He attended Bible colleges in Nyack, NY and Canada, and graduated in Jewish Studies from Moody Bible Institute in Chicago, Illinois.

Manny pioneered and popularized the use of Messianic terminology, planting Messianic congregations, Messianic Jewish television and radio, the pictorial Messianic Catalog, and Messianic evangelism and training materials such as “The Jewish Bible Approach,” “How to Share the Messiah,” and the tract “Have You Ever Heard of the Five Jewish Laws?” (These materials and more are still available directly from Sandra Brotman. She can be reached at SandraBrotman@msn.com)

Have You Ever Heard of the Five Jewish Laws?
(Click thumbnails below to view.)

Manny was married to Audrey Yvonne Kitchen in 1957. They had two children, Joel and Nathan, and lived in Chicago, where MJMI was formed. Eventually settling in Maryland, Manny and Audrey worked together to build MJMI until Audrey’s untimely death in 1986.

In 1987, Manny married Messianic Jewish singer Sandra Sheskin, and together they continued the work of MJMI. For more than the last two years of his life, Manny sacrificed to make full use of MJMI’s global outreach in the battle for the legal rights of Messianic Believers in Israel to share their faith.

On July 4, 1999, Manny was in the middle of writing an MJMI newsletter entitled, “Jerusalem, The Most Important City in the World!” when he was felled by a massive brain hemorrhage. He died a few days later.

Manny is remembered as a pioneer, trailblazer and firebrand. According to Messianic Jewish Life! Magazine, “Manny was a warrior and a front-line soldier for the cause of Jewish outreach for 45 years. No one has been able to teach and explain Jewish evangelism like he did.”